Ardalanish is first and foremost a farm and that is why the weaving mill is set at the end of the road, on a peninsula. In the late 90s, the farm changed hands and its new owners wanted to return it to an organic state. In the process, they looked at both the animals and the associated waste from the farm.

SHEEP AND COWS
For a start, existing cattle were replaced by the stronger and hardier Highland cattle, better suited for winters on Mull. This freed up the shed the existing cattle wintered in for other uses, as well as allowing for less winter feed to be stored onsite, as Highland cattle feed on naturally grown resources around the farm. The yard in the farm today was previously used as a feed store.

Hebridean sheep also found their natural place on the farm. Hebridean sheep help maintain a balance on the land: they have a diverse diet, which is less intense and demanding on the environment, they eat a wide range of vegetation, giving better healthier meat, and helping their feet become stronger and less susceptible to rot, and their shorter legs are better suited to the hilly terrain. 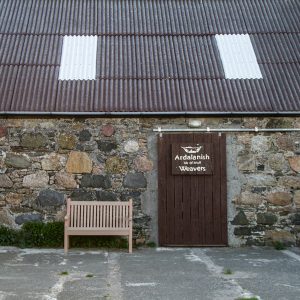 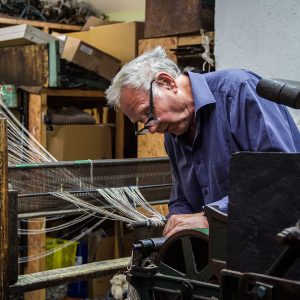 USING THE WOOL
The Hebridean fleece used to be sent away after shearing and the price paid did not even cover the cost of shearing. This naturally led to other uses being found for the fleece and it was decided to try weaving. There was now room in the old cow shed to house a mill and in some of the outbuildings to build a shop and stores.

Now, as weaving does not come naturally to most farmers, fate intervened in the form of a collaboration with Bob, the Master Weaver, who was in the process of retiring from his own Isle of Mull Weavers business and selling off machinery. Bob was promptly brought on board, his machinery put back to use and the Ardalanish Isle of Mull Weavers set up.

Since then, two looms have been added. Bob, who originally came on on a voluntary basis to train an apprentice, has trained many more and and still visits the Mill regularly to help pass on his vast knowledge and skill.

The mill now uses more than just its own fleeces: we bring in fleeces from around Mull where we can, and further afield from other native breeds. We prefer buying fleeces directly from farms breeding Hebridean flocks, Shetland whites and coloured, and Manx Loaghtan. This gives our products its distinctive natural hues and palettes. Natural dyes are used for colour accents such as woad, madder root, onion, etc. The dyeing process is mostly carried out onsite.

NEW BEGINNINGS
In 2011, Anne and Andrew Smith bought Ardalanish Farm and weaving mill from the previous owners. From a farming background themselves, they left Aberdeenshire in search for a farm which would be less demanding than their previous business. After spending some time living in their camper van and travelling around Europe, they happened upon Ardalanish. Now, a weaving mill wasn’t exactly part of the plan but Ardalanish is a special place and it seems Anne and Andrew have been convinced. They have renewed the breeding herds and spent time developing a new approach to using the resulting meat. They are also learning a lot about weaving! Maybe not quite the relaxing farm they were looking for, but their long association with this part of Mull and the beauty and appeal of Ardalanish have won them over.

Find us on social media.